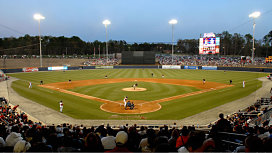 A few months after the Gwinnett Braves' inaugural season in Lawrenceville ended, Ken Haines drove past the unsponsored stadium in amazement.

"It just didn't make sense to me to have this beautiful ballpark and they weren't naming it," Haines said. "It was kind of unusual in this day and time."

Technically, it did have a name, as unexciting as it was: Gwinnett Stadium. But, especially in a rapidly worsening economic climate, the county had not been able to find a naming rights sponsor. Its year of exploratory efforts expired, it was now on the Braves organization to find one.

Haines, the president and CEO of Coolray Heating and Cooling, was about to help them out.

A lifelong baseball fan and built-from-scratch businessman, Haines called the Braves himself in January 2010. By March, they were announcing a 16-year naming rights deal. Coolray Field was born.

It was huge step for Coolray, the Braves and the county.

"We had been doing business in Gwinnett County for some time, 15 or 20 years," Haines said of his company, which is headquartered in Marietta. "It was just a great opportunity to plant some roots."

During the Triple-A affiliate's first season in Gwinnett, the county was able to cover the lack of naming rights revenue with higher than expected revenue from a 3 percent tax on rental vehicles originally passed to help pay for the stadium's construction -- but that would only last so long. They needed a sponsor.

Under the stadium lease, the Braves would receive the first $350,000 of naming rights revenue each year, with the county receiving the next $350,000. Anything above that would be split.

Though exact numbers have not been disclosed, Haines called the deal, which will close its second season with Monday's game, "one of the richest in minor league history." So what has the deal done for Coolray, outside of a suite and free tickets? Haines said it's proven to be a successful marketing strategy.

"It's hard to quantify," he said, "but so far, from what we can see, it's been a very positive thing for our organization."

In 2010, Coolray saw "three years worth" of financial growth, or about $15 million, Haines said. Some of that can be attributed to a very hot summer and the pending end of a federal stimulus tax credit for home repairs, and business did go up in Gwinnett, where Coolray has a Suwanee office. But Haines also said the stadium naming rights, aimed at increasing name recognition and top-of-mind awareness, seem to be working.

Name recognition is particularly effective marketing for a service industry, said Sherri Fallin, the CEO of Atlanta marketing firm Duffey Communications and an expert in branding. That is to say, the Philips Arena name doesn't necessarily make you want to buy their TV; but when you're in a pinch and need your AC fixed, there's a good chance the name "Coolray" will seep in from your subconscious.

When coupled with additional advertising, Coolray's stadium naming rights make for an even more pervasive attack. Constant mentions in news broadcasts and other coverage of the Gwinnett Braves team doesn't hurt either.

Of course, the "ring" has to be right as well. Coolray has a subsidiary plumbing company named Mr. Plumber. Haines said there wasn't much thought given to the idea of "Mr. Plumber Stadium."

"That's a name we didn't think was such a great fit," he said with a laugh. "I'm not sure the Braves would have gone for that one either." Stadium naming rights are no new thing. In Atlanta there are Philips Arena and Verizon Amphitheatre, among others. Minor League Baseball has stadiums like AutoZone Park in Memphis, Tenn., Coca-Cola Field in Buffalo, N.Y., and Dell Diamond in Round Rock, Texas.

One of the more unique aspects of Coolray's sponsorship, however, is how it's affected the company's community outreach.

"When you put your name on a stadium, there's a sense of responsibility that goes along with it," Haines said. "We've always been the type of organization that helps people, and we want to be looked at that way. That's just part of what comes with it."

What's come with it, in fact, is an increased Coolray presence in the Gwinnett community. They've become highly involved with local Boys and Girls Clubs (including donating AC units to the Lawrenceville location when theirs were stolen), the Gwinnett County Association of Educators and several high school sports teams. They've also helped organize food drives and other charitable events.

They're all things that may not have happened without Coolray's tie to the Braves and their stadium.

"We do a lot of things for people and try to help out where we can," Haines said. "We're more active in the community than we had been in the past."

Coolray is a locally owned and operated business, founded in 1966. They serve the greater Atlanta area with offices in Marietta, Suwanee and Jonesboro with a staff of more than 230 employees.