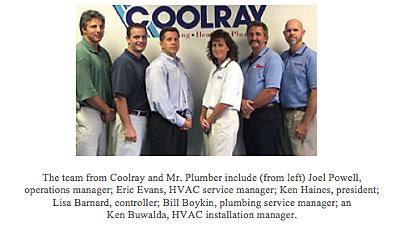 A Case Of Déjà Vu?

If some of The News’ 2005 Residential All-Stars look familiar, it’s because they are. There are many repeats on both the residential new construction team, as well as the residential replacement/add-on squad.

Leading the way for the 2005 Residential Replacement/Add-On All-Stars is, once again, American Home Maintenance of Tempe, Ariz. Owner Jordy Tessler is happy to report that his firm’s total income for 2004 was $25 million, of which 80 percent is attributed to residential replacement/add-on. Right behind in the running is newcomer Air Group LLC of Whippany, N.J., which recorded approximately $18 million in residential replacement/add-on revenue last year.

The companies are ranked according to their 2004 total sales volume, but there were other qualifications requirements, including:

The editorial team surveyed and contacted hundreds of candidates, plus asked for possible nominees via fax, phone, and e-mail. As a result, what The News has compiled is a strong list of residential contractors who can really hit it out of the park. (For the complete listing of The News’ respective All-Star New Construction and Replacement/Add-On teams, click on the link below for a PDF of the two charts.)

In the residential replacement/add-on market, American Home Maintenance keeps rolling along. Vice president Ron Schuman can point to various reasons why the company increased its overall income by $5 million from 2003 to last year.

“For Arizona contractors, 2004 was a year in which our weather conditions were not as extreme as we’ve been accustomed to, ” he said. “Fortunately, we were still able to foster growth on gross margins, closing percentages, and high-efficiency sales.”, If he had to point to one reason for staying atop The News’ Residential Replacement/Add-On All-Star team for the second year in a row, it would be to the development and training of the company’s new approach toward sales.

“One of the most important tips I can pass on is something we’ve all heard before: never prejudge the customer, ” said Schuman. “We offer everyone the opportunity to buy the most comfortable and cost-effective system for their needs, whether the client appears wealthy or not.

“When you look at rising utility costs, durability, comfort, warranties, and air quality, are we really doing the customer a favor by offering 12-SEER products? I would like to believe that most of the industry agrees we are not.”, Admittedly, it is easier to sell a lower-priced system, said Schuman, “but I feel the main reason is because our industry does not know how to sell enough value.” It’s why last year, with sales coach Joel Weldon leading the way, American Home Maintenance stressed training.

“If your organization develops an ongoing training program with the aim of teaching your technicians how to continually raise value or benefits, you will become more successful in the add-on/replacement market, ” said Schuman. “The choice is simple: stand on price and add more value, or enter into the low-bid, price-war game.”, Placing second on The News’ residential replacement/add-on team is Air Group LLC of Whippany, N.J. President John Conforti is happy to report that his company took in $19 million last year, with 95 percent coming in from replacement/add-on business.

No. 4 — Cropp-Metcalfe Air Conditioning and Heating, headquartered in Fairfax, Va is not new to The News’ list. Ironically, it had a better year in 2004 than 2003, but fell in the rankings. Not that president Mitchell Cropp is concerned. He will take $23.5 million in earnings any year. Translating that into replacement/add-on business, that’s over $11.5 million amassed in that segment last year. It was also strong in service and service contracts, taking in nearly $9 million in that side of the business.

Finishing fifth for the second straight year is Coolray Heating and Cooling, Atlanta. Owner Ken Haines’ team earned $9,754,600 in the residential replacement/add-on market [15 million in overall revenue] for 2004, plus earned more than $1 million more in total revenue for 2004 compared to 2003’s totals.

[A Case Of Déjà Vu” continues with 5 more contractors in the Residential Replacement Division and much more in the original article, see: http://www.achrnews.com.]