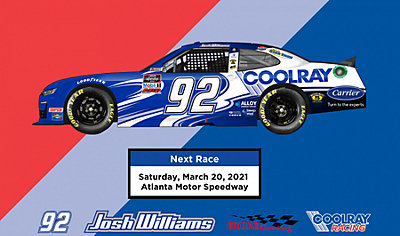 HAMPTON, Ga. – Coolray Heating, Cooling, Plumbing and Electrical has expanded its support of Josh Williams and DGM Racing ahead of this weekend’s NASCAR Xfinity Series stop at Atlanta Motor Speedway.

Williams will carry the Atlanta-based company’s brands on his No. 92 DGM Racing Chevrolet Camaro for both Xfinity Series events at the 1.54-mile quad-oval this season, starting with Saturday’s EchoPark 250 and continuing with the July 10 return visit to the venerable speedway.

The Coolray ;Company of Brands has been metro Atlanta’s leader in home maintenance and repair services for more than 50 years.

Their brands include Coolray, Mr. Plumber and BriteBox Electrical. Coolray has served the Atlanta region since 1966, with a staff of more than 450 employees and offices in Marietta, Suwanee and Jonesboro.

New carrier home comfort systems from Coolray include a lifetime parts and labor warranty, including no repair payments for life. Coolray Companies also waive all service fees with repairs.

This year’s Atlanta Xfinity race marks the second straight season that Coolray has partnered with Williams and DGM Racing at NASCAR’s second-highest level.

“We are excited to continue our partnership with Josh Williams and DGM Racing again in 2021,” said Coolray President Andy Piercefield. “Coolray is proud to have served metro Atlanta since 1966, and we look forward to having our brands aligned with the team for both NASCAR weekends at Atlanta this season. This relationship allows us with a unique opportunity to elevate our brands by aligning ourselves with a world-class sport, as well as the most dedicated fans in all of motorsports.

“We heard from many customers and team members who were excited to see the Coolray colors on the track last season, all of whom will be surely cheering on Josh this season,” Piercefield continued. “Coolray and Carrier are proud to support Josh and the rest of the No. 92 DGM Racing team. We are thrilled to partner with them as they return to Atlanta for the first time this season.”

Williams ranks 18th in Xfinity Series points entering Atlanta and is coming off a determined drive at Phoenix Raceway, where he rallied from early mechanical issues that left him four laps down to challenge for a top-20 finish by the end of the race.

The Port Charlotte, Fla., driver is just 14 points outside the playoffs through five races and believes Atlanta poses a strong opportunity for he and his DGM Racing team to make up ground on those ahead of him in the standings.

“Our intermediate program has made a lot of gains since the last time we were at Atlanta last summer, and we’re excited to get back there this weekend and improve on where we ended,” Williams noted. “It’s also exciting for our DGM Racing family to have a local company like Coolray onboard with us again this season at Atlanta, and we’re looking forward to giving them some strong performances starting Saturday.

“Fourteen points isn’t a big gap in the Xfinity Series, and with as tight as the competition is, we want to be able to gain every chance we get,” Williams added. “We believe this team can race with the best and we’ve been showing it week after week, so hopefully we can do that again and get a step closer to our goal of being in this year’s playoffs.”

Saturday’s Atlanta race also marks a milestone for Williams, as he’ll make his 100th Xfinity Series start since debuting in the series in 2016.

All but one of Williams’ Xfinity races have come behind the wheel of team owner Mario Gosselin’s equipment, something Williams values as he’s progressed from part-time to full-time status.

“There were times when I wondered if we’d ever get past the first start,” said Williams, who is in the midst of his third full season with DGM Racing. “It’s taken a lot of blood, sweat and tears to get to where we are now, and 100 starts is a big deal for a team that’s fought as hard as my guys have, as well as all of the partners that have helped us get to this point.

“We’ll celebrate where we’ve gotten to this weekend, but hopefully we can make a statement with a really strong run for Coolray and all of their employees.”

For more information on Josh Williams, visit wwwjosh6williams.com. Williams Tweets as well, and can be followed on Twitter @Josh6Williams.

The Coolray Company of Brands include Coolray, Mr. Plumber and BriteBox Electrical and have served metro Atlanta with a staff of more than 475 employees since 1966, with offices in Marietta, Suwanee and Jonesboro.