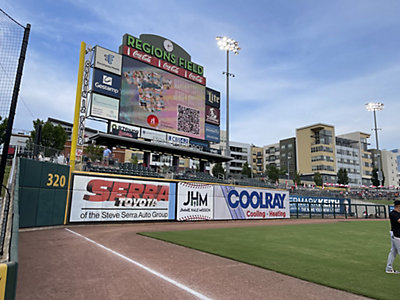 Unveiled to the public on Saturday, August 6th, Coolray Heating, Cooling, Plumbing and Electrical and the Birmingham Barons have announced a new partnership. Coolray has entered the Birmingham market with a full service of residential HVAC services. Features of the partnership include signage at Regions Field, home of the Barons.

Coolray has served as a home services leader in Georgia since 1966, and last month announced that it has opened its first location in Alabama, serving homeowners throughout the Birmingham and central Alabama area as they expand their reach across the southeast.

“We’re thrilled to partner with the Birmingham Barons for our first official partnership outside of Georgia,” said Andy Piercefield, President of Coolray Companies. “Coolray’s experienced technicians, plumbers, electricians and team are proud to bring their outstanding customer service and professionalism that we are renowned for to the Barons fans and the local community of Birmingham.”

Barons staff and Season ticket holders were lucky enough to receive a free 1-Year CoolCare Maintenance Membership as part of the partnership. Perks like this are included for all Barons Season Ticket Holders.

Jonathan Nelson President of the Birmingham Barons says, “We are very excited to add this partnership to the list of loyal Barons partners and want to welcome Coolray to the Magic City “.

The Birmingham Barons are the proud Double-A affiliate of the Chicago White Sox. For ticket information, game schedule, promotions calendar, or for additional information about Regions Field, visit barons.com or call (205) 988-3200

The Coolray Company of Brands is the southeast’s leader in home maintenance and repair services, specializing in heating, air conditioning, plumbing, electrical and water solution services.

The Coolray Company of Brands include Coolray, Mr. Plumber, Atlanta Water Works, and BriteBox Electrical and have served metro Atlanta and north Georgia since 1966 with a staff of 580 employees. The company has offices in Marietta, Suwanee and Jonesboro in Georgia as well as in Birmingham, Alabama.