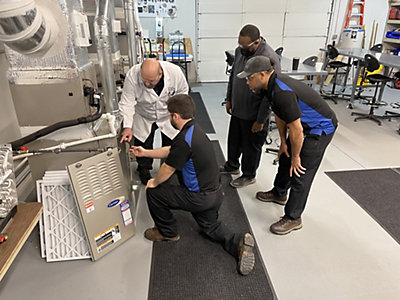 MARIETTA, Ga, March 30, 2022 – Wrench Group (“Wrench”), a national leader in home services, has long sought to address the problem of a shortage of skilled trade workers across the U.S. Now, Coolray, a Wrench company based in the Atlanta area, has developed a solution of its own: Coolray Academy, where students are paid to attend the vocational training school.

Coolray Academy offers an accelerated path to a career as a licensed skilled trade technician: students in the HVAC track participate in a 14-month program and plumber training is a 36-month track. There are currently 18 students, ranging in age from 21 to 47, enrolled in the program’s inaugural class with another 25 students set to join during the second session later this spring.

Rather than trying to moonlight with other jobs, students are paid by Coolray to attend so that they can focus on their training. In exchange, the students agree to work for Coolray for a defined period of time upon graduation.

“An apprenticeship often takes a couple of years after the initial training, and it often requires students to take on debt to do both,” said Alex Bedoya, vice president of plumbing at Coolray and dean of students for Coolray Academy. “This allows people an opportunity to start their career in the skilled trades in a much shorter period of time, debt-free, and so far they have been running with it. They see an opportunity to change their lives and their lifestyle, as skilled technicians can earn $100,000 per year.”

Beyond the classroom learning, the centerpiece of Coolray Academy is a fully-functioning, hands-on lab which the company has built out in its facility. The lab features four HVAC units, four water heaters, and other functioning appliances, including bathroom fixtures and sinks, so that students can learn their craft in a controlled environment. They also learn the fundamentals of customer service and professionalism that Coolray is known for.

“Coolray Academy is tremendously exciting, and we’ll be using it as a model to build similar programs at our other locations around the country,” said Ken Haines, CEO of Wrench Group. “From a worker standpoint, it’s an innovative way to find and train more skilled technicians. From a business perspective, it will enable Coolray to continue to grow, as it will help them to add 20 new licensed plumbers over the next three years, in turn allowing them to serve thousands more customers each year. It’s a win-win for everyone involved.”

Coolray Academy is one of multiple examples of Wrench Group companies developing their own vocational training and education programs to address the national shortage of skilled technicians. In Arizona, Parker & Sons’ leadership helped to establish a new trade school in the area as well as an in-house training program. Morris-Jenkins offers hands-on training in the Charlotte, N.C. area through its Tech Builder program. In northern California, Service Champions North offers new recruits a seven-week paid training and life skills program called Champions University.