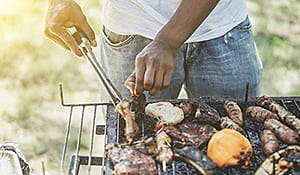 The Flavor of Summer: Grilled Meals

Don’t heat up your home during the dog days of summer. Take cooking outside by preparing your entire meal on the grill. Whether you prefer gas or charcoal, there are many creative ways to avoid using your indoor oven or stovetop until the air turns brisk again.

Let’s Start With the Veggies

At its most basic, your outdoor meal could consist of grilled meat and a veggie-rich tossed salad. You also might consider a traditional Greek horiatiki — chopped tomato and cucumber, a bit of thinly sliced red onion and green pepper, handful of arugula, Kalamata olives, and chunks of feta; all tossed in a vinaigrette of virgin olive oil, fresh lemon juice, dash of oregano, and salt and pepper.

Then there’s no-need-for-foil grilled corn on the cob. Simply buy corn in the husk (learn how to check for freshness). Once home, pull back the husk only enough to remove the greater part of the tassel. Then put the husk back in place and submerge the cobs in water for 15 minutes. Shake out the excess water and grill over a medium flame for 20 to 25 minutes or so, turning frequently. De-husk and de-silk using a kitchen towel.

A variety of other vegetables, such as potatoes, onions, and bell peppers, can be grilled using the foil pouch method. Toss sliced veggies in olive oil and seasonings and seal in foil that’s suitable for grilling. Turn pouch halfway through cooking.

On to the Main Course

Whatever your meat of choice, a couple of assumptions can be made. First, marinade is your best friend (more on that in the following recipes). Second, allowing the meat to rest is key — before and after. Bring beef, pork, or chicken out of the refrigerator about 20 minutes before cooking, and let it rest 10 minutes after cooking.

Grilled Whole Filet of Beef: Place a completely trimmed filet of beef in a marinade of two sliced yellow onions, two crushed bay leaves, one bottle of chianti (or more to cover), half cup of extra virgin olive oil, handful of Italian parsley sprigs, and several black peppercorns. Marinate at a cool room temperature for several hours, turning frequently. Remove from marinade and rub with olive oil and salt and pepper. Tie for uniform thickness. Cook over a medium-hot fire until medium-rare or preferred doneness. Let rest, then slice for serving.

Greek Chicken: Whisk together six tablespoons of extra virgin olive oil, juice of one large lemon, one teaspoon of Dijon mustard, four crushed garlic cloves, two fresh red or green minced chilies, one teaspoon of oregano, salt and pepper. Make a couple of slits in the deepest part of four or five skin-on, bone-in chicken breasts and place in marinade. Refrigerate for several hours, turning chicken several times. Grill for approximately 20 minutes per side. Serve with tzatziki and horiatiki.

Of course, there are also many wonderful grilled fish and easy shish kebab recipes on the Internet. Look to your favorite cooking sites for great summer grilling recipes. Taking your kitchen outside will mean a cooler and more livable home for your family this summer. Bon appétit!